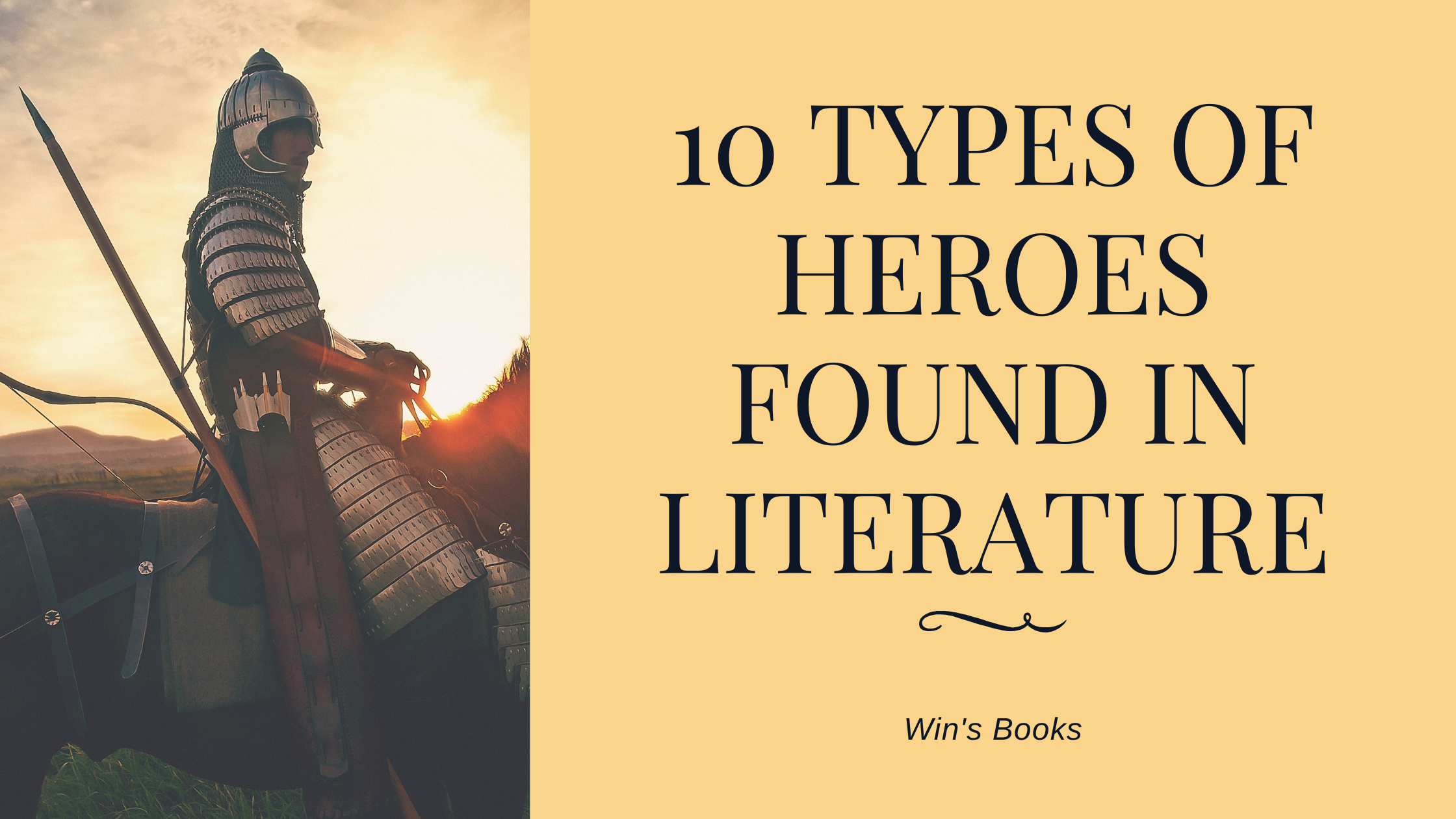 Hi everyone! As you know this week of Build-A-Book series is all about book characters. So I had a poll done on Instagram and Facebook on whether I should do a blog on different types of heroes and villains. The response was yes. As the the title says, we will be discussing 10 types of heroes found in literature. Of course this is a list I’ve compiled from my own knowledge and “expertise” on book characters and literature.

Affiliate links are used in this post. Meaning I get a small commission if you chose to purchase from some on the links. There is no extra charge to you.

10 Types of Heroes found in Literature:

Without a doubt, these heroes are committed to the adventure: constantly brave going ahead and self-motivated characters. They can also be call gun-hoe heroes. They are good to a tee and stay that way throughout the whole story. An example would be:

It’s important to remember that classical heroes are equal in their world but possess a gift that others do not have. Sometimes known as romantic heroes, they are everyday people that have tremendous talent! They often contain an attribute or quality that distinguishes them from ordinary people. Think of the chosen one stereotype. An example would be Harry Potter.

Many protagonists in realistic fiction are considered everyman heroes. The hero has no outstanding abilities or attributes. They have sound moral judgment and show selflessness in the face of adversity. It has come to mean an ordinary individual that the reader can identify. An everyman hero is put into extraordinary circumstances where they must act with heroic qualities. An example would be Walter Mitty from The Secret Life Of Walter Mitty.

These heroes are full of doubts, hesitation, passiveness. They need to be motivated or pushed into the adventure by an outside force. Usually, but not all the time, they change at some point and become committed to the tale. An example would be Frodo Baggins from Lord of the Rings.

Now most would call this person an “Anti-hero” but earlier this week I had some wonderful conversation with a fellow author buddy on why this should not be the case.

Reformed Villains are a specialized kind of hero. Maybe outlaws or villains from the point of view of society. The audience is in sympathy with them. They may win in the end over society’s corruption. And example would be Jay Gatsby from The Great Gatsby.

These are the flawed heroes. Never overcome their inner demons. Brought down and destroyed by inner demons. It may be charming, and their flaw wins in the end. An example would be Hamlet from Hamlet.

They are a part of society at the beginning. Separate from the group – have a solo adventure in the wilderness away from the group and eventually rejoin. The journey takes the hero to unknown land far from home. An example would be The Wonderful Wizard of Oz.

Ah the superhero. In mainstream media is the most well known of the hero types. A superhero is a stock person who has capacities past ordinary individuals. They regularly utilize their forces to help the world come out better as a spot or are committed to securing general society and battling wrongdoing. An example would be Pecola Breedlove from The Bluest Eye.

The story begins with a hero apart from society. The natural habitat is the wilderness, and the natural state is solitude. the journey is one of re-entry into the group, an adventure within the group, then a return to
isolation. An example would be Jack Reacher from Killing Floor.

These heroes are central figures who act heroically. They don’t change much themselves, and their primary function is to bring about change in others. Think of them like mentors for other upcoming heroes. An example would be Athena in Homer’s Odyssey.

How to write a good hero character?

Well to write a good hero is to develop a strong character overall. Here are some videos I think will help you develop amazing heroes and characters:

Let me know what you think about my list. Are there any hero types you disagree with or want to add? I hope this info will help you and others in the future! Thanks for reading and remember:

1 thought on “10 Types of Heroes found in Literature”