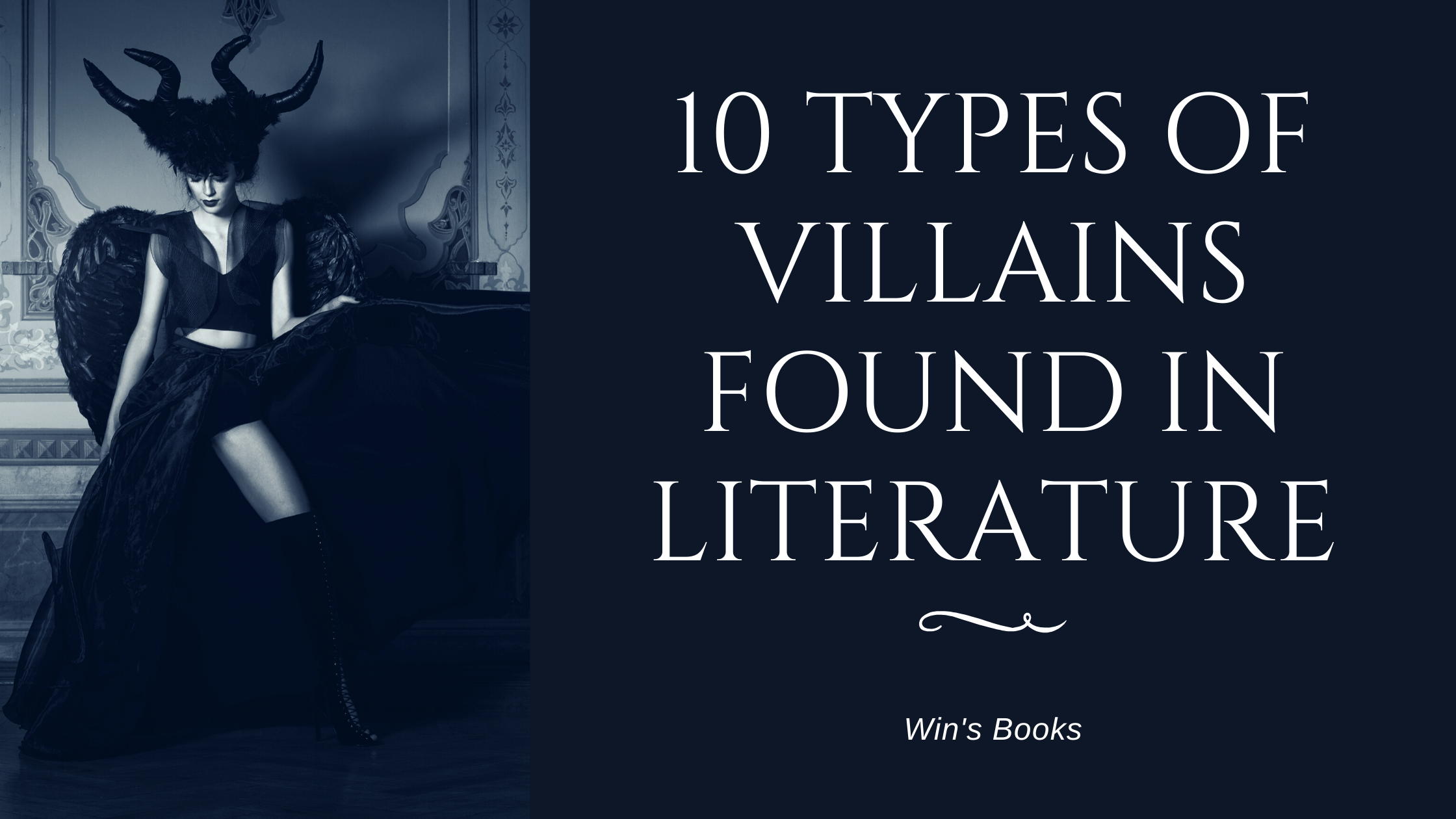 Hi everyone! As you know, this week of the Build-A-Book series is all about book characters. I had a poll done on Instagram and Facebook on whether I should blog on different types of heroes and villains. The response was yes. As the title says, we will be discussing 10 types of villains found in the literature. Click here to read about my top ten list of hero types. Of course, this is a list I’ve compiled from my own knowledge and “expertise” on book characters and literature.

10 Types of Villains found in Literature:

Ah, the Bully Villain. One that usually hits a personal spot for many people read them. They’re mean to be mean with little or no explanation asked. The Bully is in direct opposition to the protagonist/hero. The Bully, it’s simply a character that all readers can identify within the story. It’s a best-saved character for dramas since fleshing out is not required of this villain. An example would be Carrie’s mother and schoolmates in Stephen King’s Carrie.

It’s important to remember that classical heroes are equal in their world but possess The Authority Figure represents opposition to a character’s free will. This type of character is often prevalent in comedies and dramas as teachers, administrators, parents, bosses, etc. Readers are to identify with opposition to authority, even though, for the most part, they are just doing their jobs. Whether they are doing them right or well, they intend to run a school, run an office, run a family, etc. An example would be Miss Trunchbull, Matilda (a personal favorite).

Before I start, Prince Adam from Beauty and the Beast does not fit this category of the villain; he is more of a “reformed villain.” The Beast is something that is unleashed, stumbled upon, or stalking with the intent to kill. The Beast has a goal, whether due to their instincts or through the need to feed. This type of character flourishes in horror and thriller genres. An example would be Moby Dick from Moby Dick.

They are those with apparent psychological problems. Norman Bates and Annie Wilkes are perhaps the perfect examples, both of whom are present in the horror genre. The critical factor for a knave to fall under this type is that they showcase some evident inner personality struggles. The reader does not find themselves rooting for them by any means, most of the time. An example would be Hannibal from The Silence of the Lambs.

Mastermind villains are the brilliant and ruthless character who oversees the whole diabolical plan in opposition to the hero. However, they are not the character directly opposing the hero physically. They have goons or henchmen to do their dirty work for them. An example would be Professor Moriarty from The Sherlock Holmes series.

Oh, I love these types of villains so much!!! Femme Fatales are attractive and seductive women who will ultimately bring disaster to the hero (usually a man) who becomes involved with her. This villain type will clash with the hero. The exciting aspect of this villain is that the Femme Fatale can work both sides of the conflict and can even come out as a protagonist in the end or not. I love them best in film and TV shows, especially in the Noir genre. An example would be The Cocktail Waitress by James M. Cain.

They are someone that was once good but has turned evil. Sometimes I think these were villains all long; it took longer for them to have their awakening. They can also be book characters in positions of authority that should be good but aren’t (corrupt cops, politicians, etc.). An example would be Now You See Her by James Patterson.

They are the faceless foes in horror, science fiction, and suspense thrillers from hauntings or alien abductions. I have dabbled in writing this type of villain (check out my book The Lone Star Child) and want to do it more if I can. An example would be Pennywise, the Dancing Clown from It.

The Equal shares the same skills, knowledge, and savvy as the protagonist, but the ethics between the two are pretty different. They are equal in that respect. However, they differ in ethics and morals. And no, they don’t have to be superpowered to fit into this category. It could be the rival student going for class president at the hero’s school. An example would be Fireborne by Rosaria Munda.

Why are they evil? We don’t know. How did they become nefarious? We don’t know. What made them wicked? Again, we, as readers, have no clue. All we know is that they are evil. They have little to no backstory. Their motives are nothing more than performing wrongdoings, which oppose the hero of the story. An example would be in the book Lord of the Flies. You have to read it to find out with I mean.

How to write a good villain character?

Well, to write a good villain is to develop a strong character overall. For me, I feel more people struggle with writing villains more than they do heroes. I could go into another article about why I think that is, but that is for another time ;). Here are some videos I think will help you develop amazing heroes and characters overall:

There are plenty of other villain types, but these are my top ten most recognized. Fallen Heroes: Sixteen Master Villain Archetypes is a great book to read about villains and archetypes that goes into more depth than I do. You can check out this blog on villain archetypes too. Thanks for reading! I hope this info will help you and others in the future! And remember: